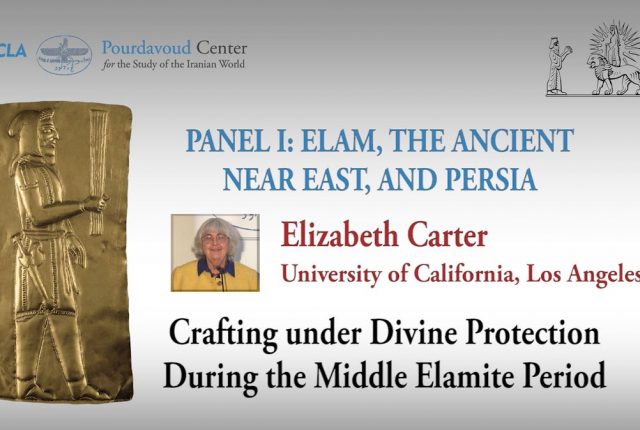 We are pleased to announce the availability of the first two presentations from the Fourteenth Melammu Symposium, “Contextualizing Iranian Religions in the Ancient World.” This international symposium was hosted by the Pourdavoud Center in Royce Hall on February 18–20, 2020, and highlights the research of 26 contributors, organized into six panels and two keynote addresses.  The first two videos feature the talks of UCLA’s own Professor Emerita Elizabeth Carter and Professor Simonetta Ponchia (University of Verona), Chair of the Melammu Board.

Crafting under Divine Protection During the Middle Elamite Period

During the last half of the second millennium BCE, the Middle Elamite (c 1600–1500–1000 BCE) kings built a number of temples both in Khuzestan and the central Zagros. Inscribed baked bricks used in their construction describe the various types of religious buildings, the divinities to whom they are dedicated, and sometimes specify their decorations and furnishings (Potts 2010). The later Middle Elamite rulers appear particularly active in this endeavor. The excavations at Kabnak (Haft Tepe) and Al-Untash Napirisha (Chogha Zanbil) have revealed craft production areas within their sacred precincts. Administrative texts from Kabnak and Anšan (Tal-e Malyan) record the receipt and disbursement of metals, some destined for the production for temple furnishings. This fragmentary data suggests that the demand for minerals and other luxury items during the Late Bronze Age led to the establishment by the crown of a network of strategically located temples that allowed the late Middle Elamite rulers to control key points between Susa and the central Zagros and thus to exploit the mineral resources of the Persian Gulf and the Iranian highlands.

The Assyrian empire is of great renown as a machine of conquest, but its most innovative feature was the implementation of an efficacious administrative system that transformed subjected kingdoms into provinces, an innovation that was replicated by later empires. Although it is hard to assess the degree of cohesion in this complex structure, it is worthwhile to examine the extant traces of a policy that was responsible for the dissemination, inclusion, and standardization of principles and procedures that shaped the attitudes of both administrators and subjects. Temples and offices in peripheral towns, as well as cults, ceremonies, and legal practices, were the main vehicles in imposing an Assyrian imperial culture. This paper examines a number of case studies that are relevant to our assessment of this administrative system, its development through time, and its impact on later empires.