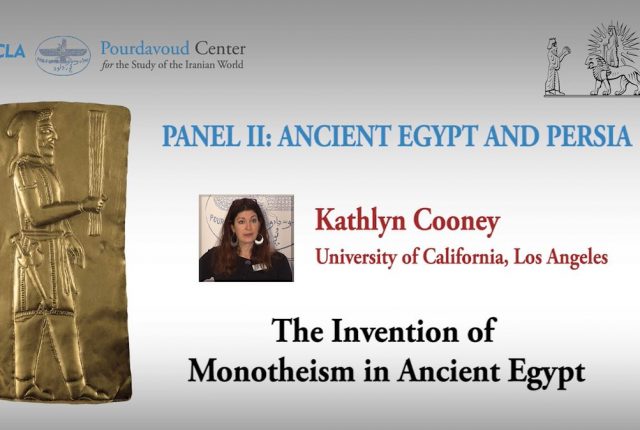 The availability of talks from the Fourteenth Melammu Symposium, “Contextualizing Iranian Religions in the Ancient World,” continues with the first two talks from the second panel, “Ancient Egypt and Persia.”  These videos include the presentations of Kathlyn Cooney (University of California, Los Angeles) and Damien Agut-Labordère (French National Center for Scientific Research).

The Invention of Monotheism in Ancient Egypt

Akhenaten’s policy of religious reform has been described in such terms as radical and epiphanic conversion to monotheism, moderate and organic movement to a limitedly practiced henotheism, and even as a conceptual form of natural philosophy not focused on religion at all. While there is clear disagreement over the motivations for the shift to Atenism in Egypt, one thing is certain: The abrupt end to Akhenaten’s 17-year reign left the pogrom instituted by the king towards the pantheon of Egyptian deities unfinished, and thus the end-goal of Akhenaten’s campaign was never truly realized. Regardless of his intentions, Akhenaten fostered a nascent religious system in which one god was elevated above all others. He left behind a wealth of artistic, textual, and archaeological evidence that showcases the conceptual transition to the worship of one deity responsible for the creation and perpetuation of the universe. This talk aims to explore this surviving Amarna evidence to identify potential parallels and synergies with Mazdean traditions.

Religious Interactions Between Persians and Egyptians in Achaemenid Egypt

In this presentation, I shall not focus on the relationship of the Persian crown and Egyptian temples, but rather address the question of religious interactions between Persians and Egyptians during the first Persian domination (526–400 BCE), and in the first half of the 4th century BCE. My approach will be resolutely micro-historical. I will begin by examining how some Persians serving the Great King in Egypt adopted all or part of the Egyptian funeral rites, for it is in this context that the phenomenon of acculturation of Iranians living in Egypt is most apparent. Subsequently, I shall examine how Egyptians may have integrated Persian elements into their religious practices and worshiped the Great King as a god. Finally, I seek to demonstrate that these phenomena of acculturation do not occur in all of Egypt, but are inscribed within a geography that corresponds unsurprisingly to the centers of Persian power in the Nile Valley.