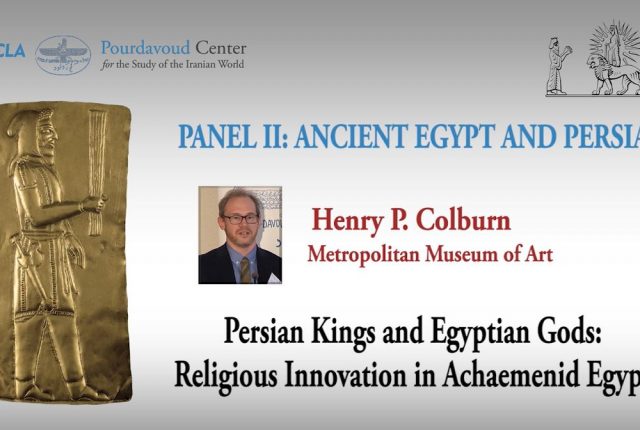 The availability of talks from the Fourteenth Melammu Symposium, “Contextualizing Iranian Religions in the Ancient World,” continues with the second half of the panel, “Ancient Egypt and Persia.”  These three videos, recorded on February 18, 2020, include the presentations of Henry P. Colburn (Metropolitan Museum of Art), Jonathan Winnerman (University of California, Los Angeles), and Marissa Stevens (University of California, Los Angeles).

The study of the relationship between Persian kings and Egyptian gods has focused mainly on questions of sacrilege and neglect. Yet there is evidence for religious innovation as well. In the Kharga Oasis in Egypt’s Western Desert, Darius I created a new kind of Egyptian temple, one that prefigures the ‘encyclopedic’ temples of the subsequent Ptolemaic period, such as at Edfu. This temple contains images of some 700 gods from throughout Middle and Upper Egypt. The purpose of this divine collection was to populate the oasis with the gods worshipped by the people who had moved there from the Nile Valley as part of a Persian effort to integrate the Western Desert into existing networks of imperial control. At the same time the process of creating this new temple goes beyond the mere performance of pharaonic duties and suggests an interest in creating systematic knowledge of the ‘gods of others’ (to borrow a phrase from Amélie Kuhrt). While this interest arguably served imperial goals, it also raises the possibility that the Persians did not regard Egyptian religion as entirely inconsistent with their own cosmic worldview.

The Cryptographic Titulary of Darius at Hibis

There are numerous writings of the names and titles of Darius I in Egyptian hieroglyphs within the temple of Hibis, located in Egypt’s Kharga Oasis. Most of these resemble Darius’ hieroglyphic titulary on other Egyptian monuments, where pharaonic elements are occasionally interspersed with traditional Persian royal epithets. Several examples at Hibis are unique, however, in that they present his titulary not in normal hieroglyphs, but in cryptography. Cryptography, which had previously seen limited use in Egypt outside the royal tomb, frequently employed intentionally obscure lists of divinities, detailed human and animal figures, or sacred objects to write phrases normally conveyed by simpler hieroglyphs. In this way, the imagery of such writings may be compared to the presentation of Egyptian divinities elsewhere at Hibis, which may reflect a Persian desire to organize and order the complex web of Egyptian religion. At the same time, cryptography also had a deep, Egyptian religious significance. This is especially true in the context of the theology of Amun, whose name literally means “He Who is Hidden.” This talk will examine these cryptographic texts as unique examples for how Iranian and Egyptian religious systems may have combined and intermingled. Rather than attempting to determine the degree of Iranian influence inherent in them, it will be argued that these texts may represent a single expression that could have had important religious significance for both Iranian and Egyptian audiences.

The Utilization of Collective Memory to Legitimate Persian Kingship in Egypt

The Achaemenid empire embraced cultural, linguistic, and religious diversity within its expansive territory and practiced a strategic willingness to tolerate – and even support – these heterogeneous customs for the greater benefit of the empire’s political cohesion. The examples of the inscription on the naoforo vaticano statue of Udjahorresnet and the archaeological evidence from Mit Rahina reveal the Persian strategy of utilizing Egyptian collective memory to their advantage. By purporting to understand Egyptian religious traditions and to restore Egyptian cultic spaces, Achaemenid rulers were overtly showcasing both their authority in Egypt and their legitimate right to rule via religious sanction. These actions embedded Persian dominion within the religious traditions of Egypt, making a strong political and economic statement of power in the process.