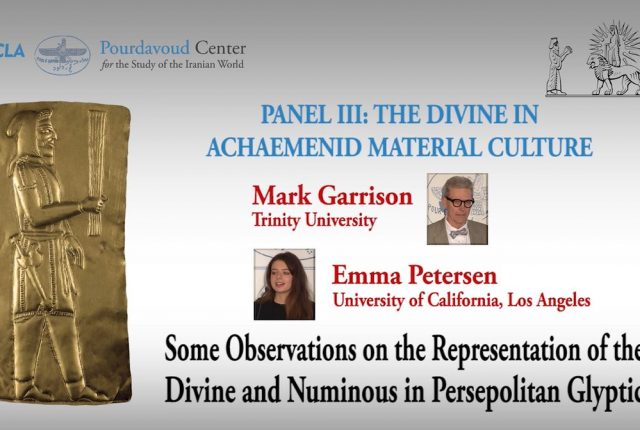 The lectures of Panel III, “The Divine in Achaemenid Material Culture,” from the Fourteenth Melammu Symposium, “Contextualizing Iranian Religions in the Ancient World,” are now available.  In these two videos, recorded on February 19, 2020, Mark Garrison (Trinity University) and Emma Petersen (University of California, Los Angeles) delivered a joint presentation on the iconography of seal impressions from the Persepolis Fortification Archive, and Ali Mousavi (University of California, Los Angeles) presented a lecture on the religious monuments of the Achaemenid empire.

The texts and seals (preserved as impressions) from the Persepolis Fortification Archive, 509–493 BCE, have revealed new perspectives on various issues surrounding the much-debated questions of religion and the representation of the divine in the early Achaemenid Persian period. This paper will highlight two topics. The first concerns a long-standing interest of scholarship in the study of the religions of ancient western Asia, namely, the nature of the relationship between the king and the divine. The second explores a millennium-old tradition of the representation of the divine and numinous on the backs of animals and fantastical creatures, what we term, within the context of Persepolitan glyptic, “pedestal creatures.” A commonality that emerges in both topics is the critical role played by the visual heritage of the Neo-Assyrian period in the representation of kingship and the divine in the early Achaemenid period.

Much has been written on the religions of the Achaemenid empire, but scholarship centered on the physical places of worship and the practice of religious rites within those spaces is either scarce or embedded in discussions of other topics. In absence of temples, certain monumental structures of unknown function have been identified as loci for religious ceremonies. This presentation reviews those Achaemenid structures and their possible religious purpose in light of new studies and excavations at sites, such as Pasargadae, Persepolis, and Naqš-e Rostam, and will attempt at elucidating the complexity of Achaemenid royal monuments, some which have so far defied all possible interpretations.