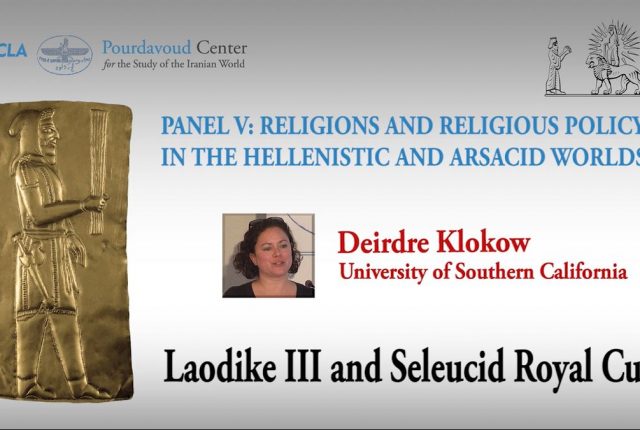 The availability of talks from the Fourteenth Melammu Symposium, “Contextualizing Iranian Religions in the Ancient World,” continues with the second half of the panel, “Religions and Religious Policy in the Hellenistic and Arsacid Worlds.”  Recorded on February 20, 2020, these videos include the presentations of Deirdre Klokow (University of Southern California) and Vito Messina (University of Torino).

In 193 BCE, the Seleucid king Antiochus III, perhaps in anticipation of his upcoming campaign in the Greek west, established a new royal cult for his queen, Laodike III. Details of the queen’s cult suggest it was intended to equal the cult of Antiochus III himself in prestige, yet its promotion was weak and by the death of the king a few years later it had all but disappeared. This paper examines a bricolage of numismatic, epigraphic, and archaeological records, particularly the initial royal prostagma, as well as the bronze Nikephoros coinage, to infer on the geographic spread and intended audience for the worship of Laodike III. Seleucid queens were not typically given a cult in their own name, making the establishment of official worship for Laodike III a key moment in considering the imposition of royal cult as a Seleucid response to a particular social and political context. Epigraphic evidence suggests that there was initial intent on widespread dissemination of, and elite involvement in, the cult, with the aim of stabilizing the future security of the dynasty. Bearing in mind the success of the Ptolemaic royal cult and in particular that of the divinized queen Arsinoe II, as well as the strong familial presence in Attalid self-representation, one must ask why this particular attempt at a female ruler cult did not come to occupy a similarly central role in Seleucid royal ideology.

Religion of Parthian Iran: A Matter of Complexity – New Evidence from Ancient Elymais

Literary, epigraphic, and archaeological evidence all demonstrate that the religions of Arsacid Iran is a matter of complexity. The attested religious beliefs and practices reflect the cultural variability of a global empire, encompassing different regions, populations, backgrounds, and even languages. Within this framework, cults and devotion are difficult to address if not considered as part of this complex phenomenon. The degree of complexity increases with the growth of available information, as demonstrated by new data from ancient Elymais (nowadays Khuzestan), the region of Parthian Iran in which monumental religious architecture and sculpture are documented more widely than elsewhere. Surveys and excavations conducted in the highlands of Khuzestan provide new insights on the complexity of religion in that region. Not only have new monumental religious buildings been discovered, which may be classified together with the famous cult terraces of Masǰed-e Soleymān and Bard-e Nešānda, but the coexistence of religious and funerary practices in the same archaeological context was also detected in one of the most important cult places of ancient Iran: the sanctuary of Shami. In the present essay, these insights are discussed in the light of the evidence that was acquired particularly during field surveys and excavations conducted by the Iranian-Italian Joint Expedition in Khuzestan, with the purpose of offering new insights into this never-ending debate.