Biennial Ehsan Yarshater Lecture Series – Whither the Achaemenid Empire? Towards a New Connected History of Afro-Eurasia in Antiquity 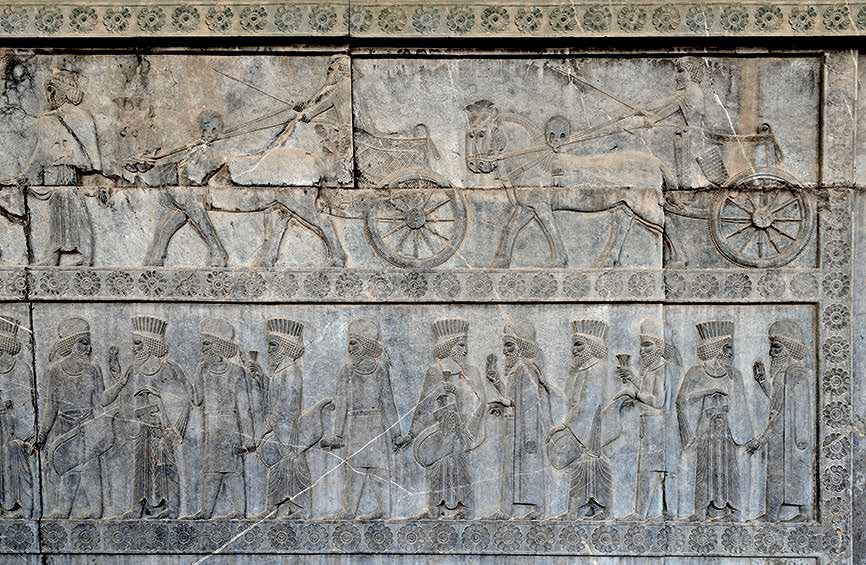 The series of lectures offers a novel and fresh perspective on one of the largest and most successful empires in world history, namely, the Achaemenid Persian World Empire (sixth to fourth century BCE), the central power of a (proto-)globalized world, and the driving force behind many cultural developments, whose manifold repercussions we may observe from Gibraltar to the Taklamakan Desert, from the Aegean and Scythian lands to the sub-Saharan worlds, and from the Bay of Bengal to eastern Africa. Our sources, both written and archaeological, are but a faint palimpsest bearing witness to the grandeur of the Achaemenid civilization, and its impress on the antique world. The present Yarshater Lectures are an attempt at deducing, from among the many ideological layers still cluttering our (narrative) sources, including the many biases, old and new, that still guide modern scholarship, the unique identity, sense of purpose, and political awareness that distinguished the Achaemenids, eventually enabling them to forge a capacious vision of the world. In these lectures, the Achaemenid Persian World Empire will be presented as a political formation that not only profoundly impacted its immediate and more distant surroundings, but also served as an imperial model that most lastingly transformed its posterity.

Lecture 2: Whither the Achaemenid Empire? Towards a New Connected History of Afro-Eurasia in Antiquity

In this lecture, the history of the Achaemenid Empire as a powerful engine of transregional connectivity, affecting all of Afro-Eurasia, is explored. Of import is not only the Empire’s capacity to boost dynamic developments, which may be qualified as an early example of globalization, but also its ability to sustain cultural individuation processes and tolerate autonomous political formations.

Dr. Rollinger’s scholarly interests are wide-ranging and encompass the cultural expanse between the Aegean world and the ancient Near East, with a special focus on ancient historiography, the comparative history of empires, and the Achaemenid Empire.

In addition to his tenure at the University of Innsbruck, he has held a number of prestigious chairs and fellowships worldwide: from 2010 to 2015, he was the Finland Distinguished Professor at the University of Helsinki in the Department of World Cultures, heading the research project “Intellectual Heritage of the Ancient Near East”; in 2020, he was a Getty Scholar at the Getty Villa; since 2020, he has been the NAWA Chair at the University of Wrocław, Poland, where he heads the international project “From the Achaemenid to the Roman Rule.”

Dr. Rollinger is also known for his numerous publications and important editorial work: he has been (co-)editing among others the prestigious series: Oriens et Occidens (Franz Steiner Verlag); Classica et Orientalia (Harrassowitz); Studies in Universal and Cultural History (Springer); Philippika (Harrassowitz); (The Proceedings of the) Melammu Symposia (Austrian Academy of Sciences); and Empires Through the Ages in Global Perspective (de Gruyter). More recently, he published together with Bruno Jacobs the Blackwell Companion to the Achaemenid Empire (Wiley-Blackwell, 2021), which shall serve as the new work of reference in the field.

He is a member of numerous academic organizations and research groups, among them: the Austrian Academy of Sciences (ÖAW); the German Archaeological Institute (DAI); and the Academia Europaea.

This RSVP form is for all four lectures. Please select the day(s) you are able to attend in person. The Zoom webinar link to attend the event online is: https://ucla.zoom.us/j/94195696556

The Ehsan Yarshater Lectures are delivered by an outstanding scholar whose work has distinctively impacted the study of the Iranian Civilization. Each biennial lecture series consists of four to five lectures on a single theme that is subsequently elaborated an amplified into a monograph. The lectures represent original research and synthesis in all aspects of Iranian Studies, including archaeology and art history, as well as history, literature, the study of religions, and philosophy.