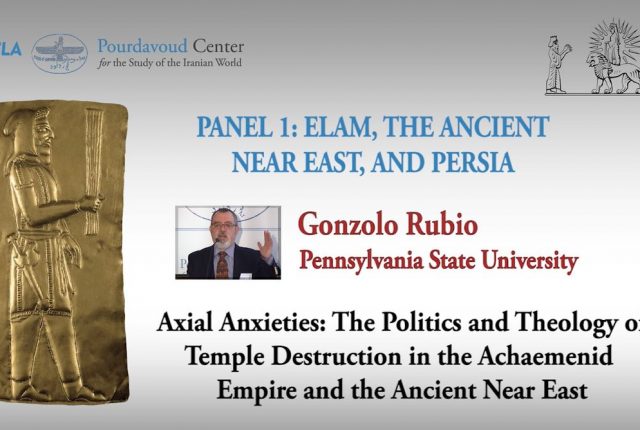 The availability of talks from the Fourteenth Melammu Symposium, “Contextualizing Iranian Religions in the Ancient World,” continues with the final three papers from the panel on “Elam, the Ancient Near East, and Persia.”  These videos include the presentations of Gonzalo Rubio (Pennsylvania State University), Salvatore Gaspa (University of Padua), and Matthew Waters (University of Wisconsin, Eau de Claire). Please note that Salvatore Gaspa was unable to attend the event in person; we sincerely thank Daniel Beckman for reading his paper at the symposium.

Axial Anxieties: The Politics and Theology of Temple Destruction in the Achaemenid Empire and the Ancient Near East

The so-called daivā inscription of Xerxes (XPh) is preserved in several duplicates on limestone tablets: two in Old Persian, one in Elamite, and one in Babylonian, all from Persepolis, and a fifth witness, in Old Persian, from Pasargadae. In this text, Xerxes claims to have reestablished the worship of Ahuramazdā after destroying a sanctuary of the daivā (daivadāna). In spite of some speculations, this daivadāna is unlikely to correspond to a temple in Babylon or in Athens. It is more plausible that this place of worship was in Iran itself. In this historical and geographical setting, the content of the daivā inscription can be retroactively read in the context of the Young Avesta as evidence of an early, state-promoted form of Mazdaean henotheism or monotheism, an alleged phenomenon usually placed within the modern historiographical construct popularized as the “Axial Age.” There is, nevertheless, a broader milieu for such activities. The destruction of temples and shrines, as well as the forcible seizure and asportation of statues of deities (godknapping), can be seen as a political exploitation of theological devices to impose political hegemony. In fact, the motif of temple destruction is rather common among Assyrian kings, as in the cases of Sargon II in Urartu, Sennacherib in Babylon and Sippar, and Assurbanipal at Susa. Such aggressions against foreign or local cults were part of larger exercises of state violence, as in the notorious case of Nebuchadnezzar and the Jerusalem Temple. It would seem as if first-millennium Mesopotamian kings took as much pride in ravaging some temples as they often took in reconstructing others. In the Achaemenid case, a particular theopolitical discourse seems to have tried to secure hegemony by manufacturing homogeneity as an instrument of legitimacy.

Constructing Religious Identities in the Age of the Empires: Remarks on the “Imperial Religion(s)” of the Early Achaemenid Period

Recent scholarship has shown that our understanding of the Achaemenid religious landscape requires not only a reassessment of the current knowledge of interactions between the Iranian world and the adjacent millennium-old civilizations of the Near East, but also a reconsideration of the methodological approach we follow to study processes of cultural interaction, assimilation, and differentiation. If previous studies on Achaemenid Persian religion predominantly followed a philological approach, couched in Indo-European linguistics, ongoing research of the last decades has shown the merits of investigating the imperial religion(s) of the early Achaemenids in light of the rich documentary evidence from the Achaemenid archives and in conjunction with the rich religious traditions of Assyria, Babylonia, and Elam. This presentation will address these topics in order to contribute to the current scholarly debate on the formation of early Achaemenid religion from the perspective of Mesopotamian and Elamite precedents.

By All Means, Ahuramazda: Help, Support, and Protect the King

This presentation explores the variations in translation and embedded meanings manifest in the formula “By the … of Ahuramazda …” among the Achaemenid trilingual royal inscriptions. The formula articulates a foundational piece of the divine-royal connection. The relevant individual words – vašnā (Old Persian), zaumin (Elamite), and ṣillu (Babylonian) – carry a range of nuances, and modern translations vary significantly because of this. The terms will be explored in their own contexts as well as (and mainly) within the context of an emerging Achaemenid royal ideology.