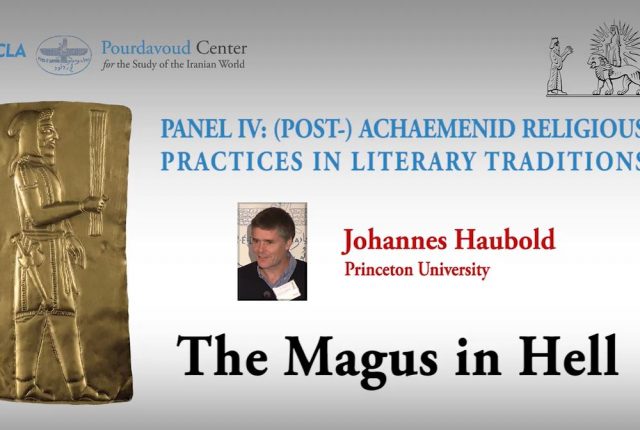 The Magus in Hell

This paper looks at Lucian’s satirical dialogue, Menippus, which prominently features a man called Mithrobarzanes, ‘one of the Magi, Zoroaster’s disciples and successors.’ With the help of this man, the protagonist of the dialogue descends to the underworld and there learns what truly matters in human life. Scholars have long compared this storyline to Iranian visions of hell and the afterlife (notably the vision of Kerdīr) but have not, in my view, sufficiently considered the context of philosophical and religious polemic in Antonine Syria to which Lucian responds. This paper aims to do just that. I first consider the framing account of a young man who despairs of Greek philosophy and turns to non-Greek traditions instead. Similar accounts from elsewhere in the region (e.g., Justin Martyr, Dialogue with Trypho) suggest a veritable crisis of philosophy, which not only challenged intellectual hierarchies between Greek and non-Greek systems of thought, but also internally transformed those systems. Second, I consider Mithrobarzanes’ characterization as a ‘Chaldean’ and ask how his ability to lead Menippus down into a realm of squalid corporeality relates to the theurgic systems for raising the soul to a spiritual realm (anagōgē) that Chaldean thinkers from Syria were developing at around the same time. The picture that emerges from my argument is one of complex (and to Lucian hilarious) entanglements between Iranian, Greek, and Syrian philosophy and religion.

The Deportation of Gods – Between Persian Policy and Ptolemaic Ideology

by Hilmar Klinkott (University of Kiel)

In early Hellenistic Egypt, a set of Ptolemaic inscriptions reported on an intriguing phenomenon, namely, Ptolemaic kings bringing back “all the gods of the country,” which supposedly the Persians had once taken away from their sanctuaries. On the strength of these epigraphic testimonies, scholars have more recently opined on the movement of Ptolemaic military campaigns in the East and the religious policy of the Achaemenid empire. This paper will mainly focus on the general behavior and religious policy of the Achaemenid Great Kings towards local cults in the administration of the empire. Moreover, this approach will aid us more adequately to understand the tenets and background of these Ptolemaic texts.