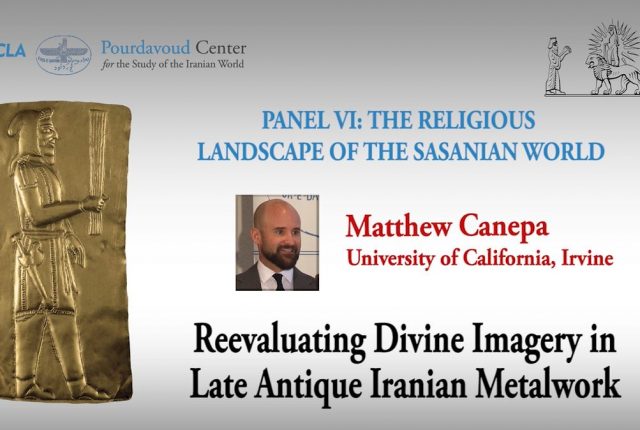 The final talks from the Fourteenth Melammu Symposium, “Contextualizing Iranian Religions in the Ancient World,” are now available. This last panel, “The Religious Landscape of the Sasanian World,” features the presentations of Matthew Canepa (University of California, Irvine) and Krzysztof Nawotka (University of Breslau).

Most late antique Iranian silver vessels are decorated with either royal imagery or stereotyped ornamental and figural imagery related to wine drinking and the ritual environment of the bazm. While there is some overlap, a small corpus of such luxury vessels integrate what scholarship might identify as divine imagery descendent from the Mediterranean divine iconographies. Often interpreted all simply as the result of one-time, transfers of exotica, such plates in fact participate in a much longer and more sustained development of Hellenistic and post-Hellenistic visual culture in Western, Central, and South Asia after Alexander. The theomorphic imagery on the plates, while idiosyncratic, does not occur in isolation, but was consumed by elites who participated in visual cultures with a long, independent tradition of Asian Hellenism. In both Iran and South Asia, deep-seated traditions of Hellenism cultivated by communities descendent from the Seleucid and post-Seleucid Hellenistic kingdoms were reinvigorated with new traditions coming from the West. Under the Parthian and Kushan empires, a brisk trade in luxury objects and even movement of craftsmen periodically brought new objects, images and ideas from the Hellenistic and Roman east to Iranian and northern Indian elites. These were subsequently integrated into contemporary currents of Iranian and South Asian art, which had originated from Seleucid and Greco-Bactrian traditions. Plates of this sort present a coda to this centuries-long process after the rise of the Sasanians. They reflect the integration – and reinterpretation – of a Classical mythological motif into a visual culture that still appreciated Mediterranean motifs but, now was created by artisans or for an audience who no longer interpreted them strictly through the lens of Classical paideia. Such vessels with divine imagery attest to a long and complicated history of interchange between the Iranian and Mediterranean worlds and this paper seeks to understand the origins and purpose of this peculiar type of luxury object.

Iranian Religions and the Alexander Romance

The Alexander Romance attributed to Pseudo-Callisthenes is the encomiastic biography of Alexander the Great, who is depicted as the champion of Greek culture and way of life. It frequently references non-Greek religions and cultures, often used as a foil that enforces the superior nature of Greek cultural values. Reference to Iranian culture and religion take distant place, paling in comparison to frequent mention of the Egyptian counterpart. For the most part the image of Iranian religion in the Alexander Romance belongs to the topos of Greek representation of barbarians and is divorced from any meaningful Achaemenid tradition. Occasionally Pseudo-Callisthenes attributes to the Persians Greek religious behavior, such as the divine worship of a living person. Some references to Iranian religion in royal titles are listed in fictional letters of Darius to Alexander and to his satraps, which do reflect genuine titles of Sasanian kings and their aspiration to divinity, as well as the Roman perception thereof. When Mithra is named in the Alexander Romance, there is no indication as to whether the Iranian god or its Roman manifestation is referred to. The most significant genuine reflections of Iranian religion and the Avesta are in the episodes connected with the Stranga, an intermittent river. Alexander crosses this river on horseback, while his Persian enemies cannot, as if the “royal glory” had already passed from Darius to Alexander. Another possible reflection of Iranian religion is the episode pertaining to Alexander’s willingness to gain immortality by drowning in the Euphrates. The method of transmission of Iranian cultural traditions into the Alexander Romance is largely unknown, although its author had a penchant for borrowing freely from various sources to embellish his biography of Alexander.