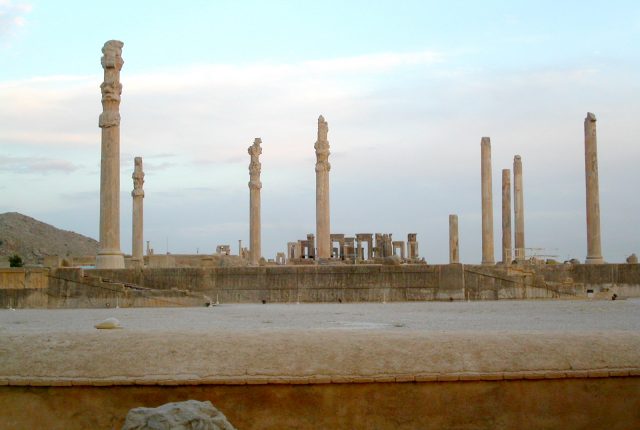 The UCLA Pourdavoud Center is pleased to announce the public launch of our new major research project, the UCLA Archaeological Gazetteer of Iran. This project is a free-access, web-based encyclopedia of archaeological sites, places, and monuments in the greater Iranian World. The Pourdavoud Center envisions the Gazetteer to become a major vehicle for archaeological research on ancient Iran, as well as a digital resource for scholars and students worldwide.

The Pourdavoud Center supports several digital and field research projects that situates ancient Persia within a broader cultural context. Led by Dr. Ali Mousavi, one major project involves building an interactive online platform that features the history, site reports, maps, and photographs of major archaeological sites in ancient Iran. The Center’s vision is to expand this project into a major vehicle of archaeological research on ancient Iran.

The Archaeological Gazetteer of Iran (https://irangazetteer.humspace.ucla.edu/) is an open access online encyclopedia of Iranian archaeological sites of all historical periods. The Gazetteer is a research tool that provides the essential, up-to-date information on archaeological sites in a digital format. The Gazetteer consists of three main components: a map on which archaeological sites are plotted with the option of zooming and filtering according to historical periods, a catalogue of sites arranged alphabetically and chronologically, and a section for digitized publications and online sources relating to ancient Iranian studies. The Gazetteer is intended to cover all archaeological sites of ancient Iran regardless of the present-day political borders of the country, thus expanding its functionality and use to adjacent regions (Transoxiana, Mesopotamia, Anatolia, Asia Minor, Arabia, and Egypt). The Gazetteer’s entries are structured to include name(s) of sites, their location and geographical coordinates, their history and description, full records of archaeological exploration, maps, illustrations, and a bibliography for each site. There is no limit for the length of entries or illustrations; their content depends on the volume of archaeological data for each site. It is the hope that all of the material hosted in the Gazetteer could be queried and organized not only by site, but also by types of finds, similar architectural features, equivalencies in dating, etc., and that all of these filters would be accessible to users of the website for research purposes.

The number of archaeological publications in Iran has remarkably increased in the past twenty years, but the availability and preservation of these sources for scholarly use have not reached the status these publications deserve. While some resources include abstracts in English, the bulk of published reports is in Persian. The distribution of Iranian archaeological publications is often very limited and these materials soon become out-of-print. Institutional libraries in North America and Europe infrequently receive some of these publications, but most Iranian archaeological reports remain inaccessible or unknown to the wider community of scholars. The creation of a web-based, interactive gazetteer dedicated to the consolidation, preservation, and dissemination of archaeological news, reports, multi-media files, and publications would remedy the current vacuum. This initiative would collect and digitize important works and publications and present them in English translation to specialized and interested audiences through a dedicated website, thereby contributing to the visibility of current research and developments in Iranian archaeology.

Thus, the UCLA Archaeological Gazetteer of Iran project’s aims are two-fold: the publication of excavations reports not previously disseminated, and the creation of a gazetteer of archaeological sites and their related published reports, with particular emphasis on those with remains of historical periods such as the Parthian and Sasanian periods. In addition, the Gazetteer website will be used as an instructional tool for the undergraduate courses such as the Iranian Civilizations (ANE M110A-C), the Archaeology of Iran (ANE CM163), Ancient Cities of Iran (ANE 187), and can also be useful for a wide range of courses on ancient art and archaeology, as well as courses in the digital humanities. The gazetteer will consist of two components, a quantitative approach to enlist all the archaeological sites and fieldworks pertaining to Iranian archaeology regardless of the present political borders of Iran, and to create data layers and analytics, including the relevant published and/or unpublished materials in multiple languages.

The goals of this project are: