Skip to main content
Home » Achaemenid Egypt: The Archaeology of a Colonial Encounter

Achaemenid Egypt: The Archaeology of a Colonial Encounter

Achaemenid Egypt: The Archaeology of a Colonial Encounter

Traditionally, Egyptologists have regarded the period of Achaemenid Persian rule (the 27th Dynasty, c. 526-404 BCE) as an unmitigated disaster for the Egyptians. This view, however, is based primarily on the perception that there is a scarcity of material from this period; in turn this scarcity is read through an orientalist lens as the result of oppression and political and economic turmoil. This is not to say that turmoil and oppression did not take place, but that our understanding of this period should arise from a critical engagement with the evidence rather than an argument from silence.

In this lecture I argue that this scarcity is as much a consequence of modern factors as ancient ones. I provide several examples, drawn from my recent book, of material culture, including statues, stelae, coins, drinking vessels and tomb reliefs, that can or must date to the 27th Dynasty. Each of these types of objects sheds different light on how the Egyptians – and other people living in Egypt – experienced Persian rule. These experiences could vary considerably, ranging from exploitation to acculturation, precisely the diversity of experience that comparative studies of colonialism lead us to expect. Thus Achaemenid Egypt was not an unmitigated disaster per se, but a colonial encounter like any other. 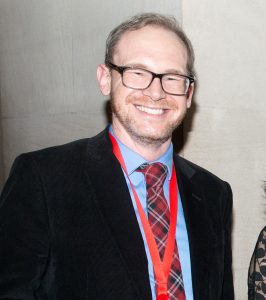 Henry Colburn earned a PhD in Classical Art and Archaeology from the University of Michigan. His research focuses on the art and archaeology of ancient Iran, and on the regions of the Near East, Eastern Mediterranean, and Central Asia that interacted with Iran prior to the advent of Islam. His first book on this subject, Archaeology of Empire in Achaemenid Egypt, was published earlier this year. He has held fellowships at the Harvard Art Museums, the Getty Research Institute, and the Metropolitan Museum of Art, and teaching positions at the University of California, Irvine and the University of Southern California. He is currently a Research Associate of the Kelsey Museum of Archaeology at the University of Michigan by virtue of his ongoing work on the seals of the Persepolis Fortification Archive.