Narseh’s Diadem: Religion, Royalty, and Power under the Early Sasanians

Narseh’s Diadem: Religion, Royalty, and Power under the Early Sasanians

This talk focuses on the Sasanian king Narseh (293-302 CE), who celebrated his accession to the throne through the bilingual inscription (Middle Persian and Parthian) and commemorative monument built in Paikuli, the site currently studied by the archaeological mission of Sapienza-University of Rome: The Italian Archaeological Mission to Iraqi Kurdistan (MAIKI – Missione Archeologica Italiana nel Kurdistan Iracheno). The mission’s work in Paikuli focuses on the reconstruction and preservation of the monument and its unique inscription. Choosing a holistic scholarly approach and joining methodologies of historical linguistics and philology with those of archaeology, field campaigns were organised in 2007, 2008, 2018, and 2019, revealing a number of previously unknown inscribed blocks; a first volume of these new inscriptions was published in 2014, and the remaining inscriptions will be published in the final report. This lecture will present the multiple scientific methodologies and research approaches applied over the years and will also illustrate strategies to promote the monument in the framework of Kurdistan’s cultural heritage, including the Paikuli Gallery built by MAIKI in the Slemani Museum and the recent realization of an exhibition at Sapienza, which features a tactile 3D printing of one of the
Narseh’s sculptures (once decorating the Paikuli monument and now preserved at the Slemani Museum). These strategies offer clear examples of the potential of interaction between field documentation and the application of innovative technologies aimed at promoting full accessibility of Cultural Heritage. 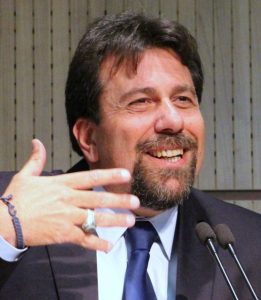 Carlo G. Cereti is a Professor at Sapienza – University of Rome in Iranian Philology, Religions and History.  He also serves as the Coordinator of the Class in Humanities at the Scuola Superiore di Studi Avanzati – Sapienza, the Director of the Winter School in Cultural Heritage of the Near and Middle East, a Rector’s delegate for International cooperation, and a Senior Fellow at the Scuola Superiore di Studi Avanzati – Sapienza. He studied at the Istituto Universitario Orientale of Naples where in 1985, he obtained his Master’s (Laurea) degree in Oriental languages and civilizations focusing on Iranian and Indian Studies. In 1992, he obtained his Ph.D. in the same field.  From 1997 to 1999, Professor Cereti was engaged in research at the Kommission für Iranistik of the Austrian Academy of Sciences, while at the same time teaching Iranian Languages at the Seminar für  Sprachwissenschaft of the Vienna University. In 1999, he served as a visiting professor at the École Pratique des Hautes Études in Parism and in 2002 acted as Directeur de Recherche at the UMRS “Monde Iranien” of the French CNRS. He has published extensively in Iranian Studies, mainly on Middle Persian and Zoroastrianism. His publications include: An 18th  century Account of Parsi History, The Qesse-ye Zartoštiān-e Hendustān, The Zand ī Wahman Yasn: A Zoroastrian Apocalypse, and La Letteratura Pahlavi. Introduzione ai testi con riferimenti alla storia degli studi ed alla tradizione manoscritta.  Professor Cereti is also a Consulting editor of Encyclopaedia Iranica, a Member of the Editorial Board of Iran and the Caucasus and The Journal of Persianate Studies, and a Member of the Advisory Board of Vicino Oriente and Studi e Materiali di Storia delle Religioni.