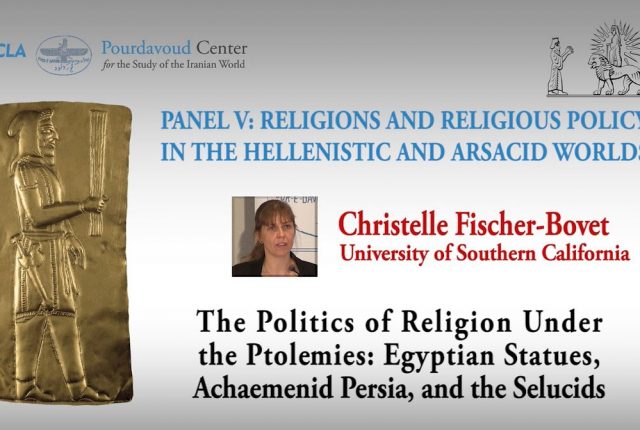 Two new videos from the Fourteenth Melammu Symposium, “Contextualizing Iranian Religions in the Ancient World,” are now available.  These videos, recorded on February 20, 2020, are part of “Panel V: Religions and Religious Policy in the Hellenistic and Arsacid Worlds,” and feature the research of Christelle Fischer-Bovet (University of Southern California) and Rolf Strootman (Utrecht University).

The Politics of Religion under the Ptolemies: Egyptian Statues, Achaemenid Persia, and the Seleucids

The stealing of religious statues from a defeated enemy was a common practice among Near Eastern empires to display political superiority. Accordingly, the return of such statues was the just action of rulers able to defeat, in turn, their opponents and to extend their empires. There is, however, no clear evidence of this practice in relationship to Egypt until the Macedonian dynasty of the Ptolemies. In two hieroglyphic steles dated to the first two Ptolemies (Satrap and Steles, 311 BCE and c 264 BCE) the priests thank the kings for bringing back the statues of Egyptian gods found in Syria and Palestine, while the newly discovered trilingual synodal decree of Alexandria (243 BCE) and the Adulis royal inscription mention statues recovered by Ptolemy III from Babylonia, Persia and Susiana. Such statements about statues stolen by the Medes or the Persians are still made after the Ptolemaic victory over the Seleucids at Raphia in 217 BCE. By looking at these inscriptions, this paper explores the increasing entanglement of Near Eastern imperial and religious traditions in the early Hellenistic period, and the role of the Ptolemies in this process. It argues that the Ptolemies were constructing Egypt as the new imperial center and it examines how the Ptolemies, by orchestrating the return of these (supposedly) stolen statues, engaged with the cultural memory of different population groups in Egypt (Egyptian priests, Greco-Macedonian elites, Egyptian population). They were reshaping memories hostile to the successive Near Eastern empires and adapting them to a new context.

The Marriage of Antiochos and Nanaia: Empire and Religion in Hellenistic Iran

Starting with the example of Antiochos IV Epiphanes’ (intended) sacred marriage with the goddess Nanaia in Elam (2 Macc. 1.13–17), this paper explores the Seleucid empire’s relation with Iranian sanctuaries. Following the example of the Achaemenids, the Seleucid king and court interacted with local communities by protecting and patronizing indigenous sanctuaries. Moreover, the king and his itinerant court regularly visited cities. During such visits, the king would personally participate in cultic activities, providing offerings and often performing the crucial act of sacrificing to a community’s principal deity. The religious sphere thereby became a contact zone were local elites and the imperial court met under the impartial supervision of a mutually recognized divine power. Temples also functioned as repositories of wealth; but the various stories about royal temple robberies suggest that there was no general agreement as to the degree of access the king had to these riches.